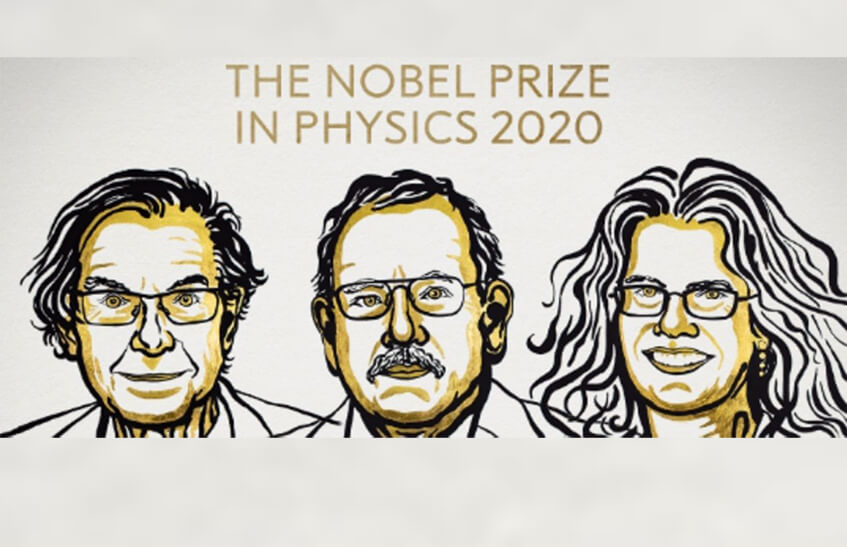 WASHINGTON, D.C., Oct. 6, 2020 — Laureates Roger Penrose, Reinhard Genzel, and Andrea Ghez have been awarded the 2020 Nobel Prize in physics for discoveries related to black hole formation (Penrose) and of a black hole at the center of the Milky Way (Genzel and Ghez). Penrose, Emeritus Rouse Ball Professor of Mathematics at the University of Oxford, will receive half of this year’s winner’s prize, totaling more than $1.1 million; Genzel, acting director of the Max Planck Institute for Extraterrestrial Physics and University of California, and Ghez, professor of physics and astronomy at UCLA, will share the other half.
Penrose earns the prestigious honor “for the discovery that black hole formation is a robust prediction of the general theory of relativity.” Genzel and Ghez are honored “for the discovery of a supermassive compact object at the center of our galaxy.” Genzel and Ghaz used adaptive optics technology to increase the speed of the observational process of stellar orbits in determining the presence of a supermassive black hole. The pair also relied on infrared telescopes to image their discovery and the surrounding Milky Way galaxy.

The technique of infrared speckle imaging, specifically, was vital to the observations of Genzel and Ghez. Speckle imaging takes numerous, short, highly sensitive exposures of a target star from a telescope, and sharpens the captured image by stacking the acquired data to produce a crisp image. Increasing the sharpness of observations is necessary to effectively track stellar motions at a scale that allows scientists to make requisite measurement calculations.
Teams led by Genzel and Ghez (as individuals) additionally used high spatial resolution imaging, such as the adaptive optics system at the Keck Observatory telescope and the European Southern Observatory’s Very Large Telescope, to show the revolution of stars around a heavy system at the galactic center.
The telescopes have near-infrared instruments that allowed observations through interstellar dust and an adaptive optics system that compensated for the turbulence of the atmosphere, enabling the observation of stars orbiting the galactic center.
The use of adaptive optics significantly shortened the exposure time needed for the observations; prior to the technique’s emergence, scientists were unable to definitively identify the presence of a black hole at the center of the Milky Way. In the process, the effect of atmospheric turbulence at a given, charted moment enables real-time reshaping of the wavefront of light from the astronomical target (typically a star) under observation. Instruments such as deformable mirrors counter atmospheric distortions, allowing reshaping to occur.
Adaptive optics systems are also amenable to highly-sensitive spectroscopic devices, capable of probing stars’ radial velocities and revealing a fuller and more comprehensive picture of their motion.
“The contributions of adaptive optics in providing a razor-sharp view of the cosmos have been critical to these extraordinary discoveries,” OSA President Stephen Fantone said. “The pioneering work on real-time active correction of telescope optics and the use of laser guide stars were among the many optical developments that have revolutionized the tools of modern astronomy.”
Ghez is the fourth woman to win a Nobel Prize in physics. Nobel Laureate and 2013 OSA President Donna Strickland, the third woman to win a Nobel Prize in physics, shared the 2018 prize with OSA member Gérard Mourou for groundbreaking discoveries in the field of laser physics. They were honored for “their method of generating high-intensity, ultrashort optical pulses.” The late Arthur Ashkin was also awarded the physics prize that year for inventing optical tweezers that use laser fields to move particles, atoms, viruses, and other living cells in studying biological systems.
منبع : https://www.photonics.com
نظرات
ارسال نظر
طراحی سایت , طراحی سایت فروشگاهی Copyright © 1401 falcon.ir