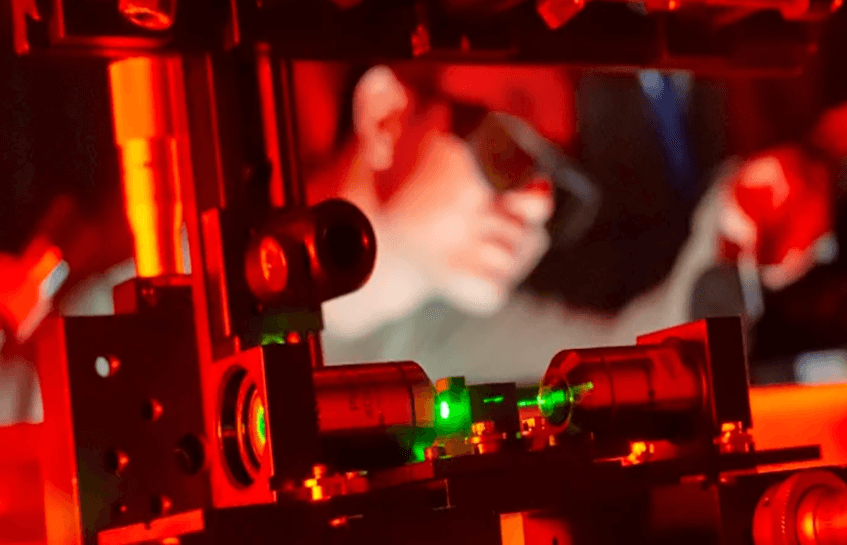 JENA, Germany, Oct. 9, 2020 — A Jena, Germany-based research team, working with its Australian colleagues, has grown 2D materials directly on optical fibers. The researchers used a technique that involved integrating transition metal dichalcogenides, a 2D material with strong optical and photonic properties, into optimally constructed glass fibers.
The materials system the researchers’ technique produced holds value in sensor technology, where it could be used to detect low concentration of gases, as well as in nonlinear light conversion. Because the hybrid optical fiber developed by the team possesses nonlinear properties, the fiber can convert monochromatic laser light into white light — supporting spectroscopic applications in biology, chemistry, and beyond.
Unlike in previous research, the scientists opted not to apply the 0.5-nm-thick sheet of transition metal dichalcogenide material manually, instead choosing to grow it directly on the optical fiber. The approach simplified the process of integrating a material into the fiber and increased the scale at which the researchers were able to do so. The material’s strong interaction with light was one of two effective interactions in the system: Light in the glass fiber also interacted strongly with its coating, an important feature that moves the system toward practical application, the researchers said.

The growth process itself, developed at the Institute of Physical Chemistry at the University of Jena (Friedrich Schiller University Jena), is based on chemical vapor deposition (CVD) and uses a temperature of greater than 700 °C to ensure material growth in the fibers. Despite the extreme temperature, the optical fibers are suitable for CVD growth. Pure quartz glass functions as a substrate in the process.
“Due to the functionalization of the glass fiber with the 2D material, the interaction length between light and material has now been significantly increased,” said Antony George, who is developing the manufacturing method for the novel 2D materials together with the University of Jena’s Andrey Turchanin.
In potential sensor and detector applications — namely, the detection of low concentrations of gases — a green light sent through the fiber acquires information from the environment at the fiber areas functionalized with the 2D material. Then, as external influences alter the material’s 2D properties, light changes color before returning to a measuring device as red light.
Sensors based on the technology may also be suitable for biotechnological and medical applications, the researchers said, given how fine the new fibers are. Additional applications could enable quantum communication and quantum electronics.
Research collaborators in the work came from the Institute of Applied Physics and the Institute of Physical Chemistry of the University of Jena; the University of Jena’s Abbe Center of Photonics; the Fraunhofer Institute for Applied Optics and Precision Engineering (IOF); and the Leibniz Institute of Photonic Technology.
منبع: https://www.photonics.com
نظرات
ارسال نظر
طراحی سایت , طراحی سایت فروشگاهی Copyright © 1401 falcon.ir